“The fact that sodium fluoride would control
certain types of insects had been known
for many years, but all attempts to use
it and other fluorine compounds
on plants failed
because of plant injury.“

“Fluorine has played a significant role in insect control since about 1896 when sodium fluoride and various iron fluorides were patented in England as insecticides. Sodium fluoride was used in the United States for cockroach control before 1900 and was introduced in 1915 for the control of poultry lice. However, the use of fluorine insecticides did not become general until the 1930´s when the disadvantages of arsenical residues on food crops became apparent and the inorganic fluorine compounds were introduced as safer substitutes.

‘
Systematic investigation of organofluorine insecticides began about 1935 in the I. G. Farben industrie and the fluoroalcohols and fluorophosphates (phosphorofluoridates) were intensively investigated largely through the research of Schrader (1952). During World War II fluoro-DDT or “Gix” was used for the control of insects of medical importance. More recently, fluoroacetamide and analogues have been used as systemic insecticides and a large variety of other fluorinated organic compounds have shown insecticidal activity. Sulfuryl fluoride has recently been marketed as a fumigant for household and structural pests…”

Alvord and Dietz, of Grasselli Chemical Company, Cleveland, Ohio, point out certain problems with the use of soluble fluorides as insecticides (Ind. Eng. Chem. 25 (June 1933) 629-633):

“The fact that sodium fluoride would control certain types of insects had been known for many years, but all attempts to use it and other fluorine compounds on plants failed because of plant injury. Progress along the line of utilizing the fluorine compounds in this connection really began with the discovery by Roark that the relatively insoluble fluorides would not injure the foliage and would control certain insects. About the time of this discovery, the Grasselli Chemical Company began to experiment with barium fluosilicate. The development of this material was held back for several years because of plant injury following its use, and it was not until the discovery, quite by accident, that the injury was due to an unsuspected impurity and that the pure compound was in reality safe to most foliage, that rapid progress was made.”

“The value of sodium fluosilicate as an insecticide is due to the fact that it is both a contact and stomach poison. Shafer has determined that when a roach walks over powdered sodium fluoride a little of the powder adheres to the lower part of the body, antennae and tarsi of the feet, and dissolves in the exudations of the integument. This seems to cause some irritation and uneasiness; the insect soon begins to clean the moistened powder from the body by licking it. In doing this enough of the poison may be brought into the mouth and swallowed, to kill after a period varying in from five to ten days. Other insects, such as Mexican bean beetles, also have the habit of cleaning themselves and by putting their feet in their mouths become very easy to kill. For this reason the sodium fluosilicate is more effective against the adult beetles than the larvae, which do not have these habits.”

Because of such habits, toxicity to higher animals became of concern (Marcovitch S.:
“The fluosilicates as insecticides”, Ind. Eng. Chem. 18 (June 1926) 572-573

Charles Henry HIGBEE, of New York City, N.Y., Manager of Manufacturing Company: “An improved composition or material for destroying insects”, British Patent GB 8236; filed April 18, 1896; pat. May 23, 1896. (“The compounds of fluorine which I employ for the purpose of destroying insects, are certain soluble ones, viz.: sodium fluoride, ferric fluoride, the silico-fluorides of the same bases, hydro-fluo-silicic acid, and the boro-fluo-silicates”, which the inventor claims to be less toxic for humans then many of the compounds then in use for the same purpose, i.e. “arsenic, copper, phosphorus, and the like”)

Karl Heinrich WOLMAN and Bernard DIAMAND, Idaweiche, Oberschlesien, Germany, assignors to Max Marschall, Nice-Cimiez, France: “Preserving composition for fibrous material”, US Patent 934,871; filed Nov. 6, 1906; granted Sept. 21, 1909  (uses “sodium fluorid” and “sodium silico-fluorid”. “We have also found that the salts of hydrofluoric acid and of silicofluoric acid both of which are weak, bactericidal acids when used in connection wioth a strong mineral acid, as above set forth, will produce good results …”)

Carleton ELLIS, assignor, by mesne assignments, to Chadeloid Chemical Company, of New York, N.Y.: “Insecticide”, US Patent 1,082,507; filed March 11, 1908; pat. Dec. 30, 1913 (“The composition comprises a solution of wax in carbon bisulfid, or similar penetrating organic liquid, emulsified with an aqueous solution, considerably thickened for the purpose of emulsification, and carrying in solution a powerful insecticide such as inorganic compounds like bichlorid of mercury and ammonium fluorid, or organic compounds like ammonium formate, etc.”)

Jacques WITTLIN, of Vienna, Austria-Hungary, assignor of one-half to Siegfried Schlewinger, of New York: “Antiseptic”, US Patent 1,044,840; filed Jan. 12, 1911; granted Nov. 19, 1912 (“… my present invention further contemplates the incorporation of ammonium fluorid or equivalent fluorin-containing salts or fluorin compounds in the preparation of the antiseptic, whereby the germicidal or disinfectant properties thereof are very materially increased.”)

Henry Edward Percy HUTCHINGS, of Barking Essex, UK: “Improvements in or relating to rat and other vermin poisons”, British Patent GB 187,424; filed Sept. 15, 1921; pat. Oct. 26, 1922  (a bait for the purpose of rat and mouse extermination, with additions of either sodium fluoride, barium carbonate, squill or oxalic acid, to serve as a basic poison)

Rurik C. ROARK, Baltimore, Md.: “Insecticide”, US Patent 1,524,884; filed Aug. 6, 1923; granted Feb. 3, 1925 (“The poisonous action of soluble fluorides is well known and has been utilized for the control of injurious insects. For example, sodium fluoride, a salt readily soluble in water, is a very effective roach poison and is a common ingredient of roach powders. Potassium and barium fluorides have been similarly employed …”)

“There is nothing new in the use of sodium fluosilicate as an insecticide. Its use for that purpose was described nearly thirty years ago by HIGBEE (English Patent No. 8236, May 23, 1896). More recently, WILLE has reported tests with sodium fluosilicate against roaches and COBENZL mentions it as a common ingredient of rat and insect poisons” (Roark C., Department of Agriculture: “Fluorides vs. fluosilicates as insecticides”, Science 63 (April 23, 1926) 431-2)

Bernard GEHAUF and Harold W. WALKER, of Edgewood, Md.: “Method of making silicofluorides and products thereof”, US Patent 1,617,708; filed May 14, 1926; pat. Feb. 15,1927 (“This invention … also comprises a new composition of matter for insecticidal and other purposes … made by neutralizing hydrofluosilicic acid with the appropriate base … Hydrofluosilicic acid ordinarily is prepared by contacting various waste gases containing silicon fluorid with water.. Waste gases containing silicon fluorid arise in various industries, as in the manufacture of superphosphates.”)

Martin J. FORSELL, Seattle, Washington: “Insecticide”, US Patent 1,618,702; filed Aug. 30, 1926; granted Feb. 22, 1927 (“The insecticide consists of using apple after it is dried and powdered and mixing therewith any well-known poison in powdered form … any one of the compounds of fluorine preferably sodium or potassium fluoride or sodium or potassium silico fluoride …)

Roscoe H. CARTER, Washington D.C. (Government employee): “Process for the manufacture of insecticides and method of making same”, US Patent 1,842,443; filed Nov. 15, 1929; granted Jan. 26, 1932  (“As pointed out in other patent applications of mine, the double fluorides of the alkali metals are useful insecticidal materials and can be formed from water soluble salts of aluminum by treatment with alkali metal compounds and fluorine acids in the proper molecular proportions.”)

Arthur H. HENNINGER, assignor to General Chemical Company, New York: “Process of making potassium aluminum fluoride”, US Patent 1,937,956; filed June 18, 1931; pat. Dec. 5, 1933 (“… for use as an insecticide. It has heretofore been proposed to use potassium aluminum fluoride as an insecticide for the control of various insect pests. This material is considered to possess advantages over lead arsenate as an insecticide for the reason that, although poisonous, the fluoride compound is less toxic to human beings and animals than is lead arsenate.”)

John E. MORROW, assignor to Aluminum Company of America: “Insecticide and method of producing same”, US Patent 2,210,594; filed Jan. 6, 1938; pat. Aug. 6, 1940 (“Double fluorides of sodium and aluminum, such as natural and synthetic cryolite, have been used as insecticides, and the usefulness of such compounds as stomach poisons for various insects has been established. It has been demonstrated, for example, that these fluorides are particularly useful in combatting the codling moth and the Mexican bean beetle.”)

Alan BELL, Kingsport, Tennessee, assignor to Eastman Kodak Company, Rochester, N. Y.: “Insecticidal compositions comprising either hexyl alkyl tetraphosphate or tetra-alkyl pyrophosphate and either an alkali metal fluoride or fluorosilicate”, US Patent 2,514,621; filed Dec. 26, 1948; granted July 11, 1950  (“Diethyl phosphate is the hydrolysis product produced by most of these phosphorus insecticides such as organic insecticides derived from triethyl phosphate – thionyl chloride reaction product, hexaethyltetraphosphate, tetraethylpyrophosphate.
This hydrolysis product is not as toxic as parent compound in itself but mixed with NaF or Na2SiF6 has considerable toxicity.”) 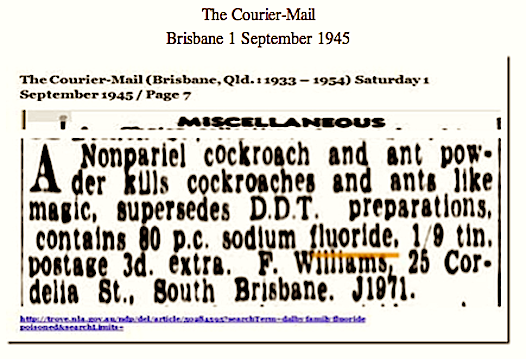 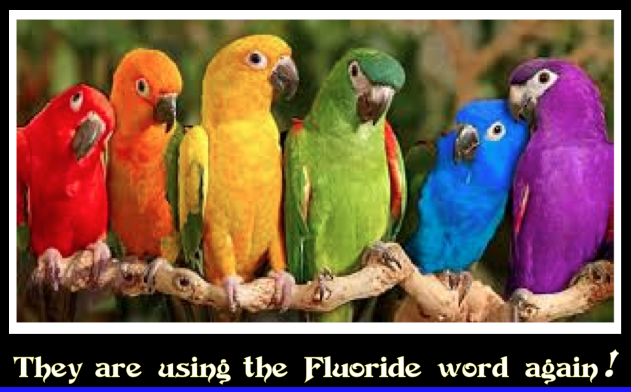