The children were suffering from unexplained excessive
fatigue, nausea, stomach-ache, and joint and limb
pain, from which they recovered when they
stopped taking the fluoride tablets. 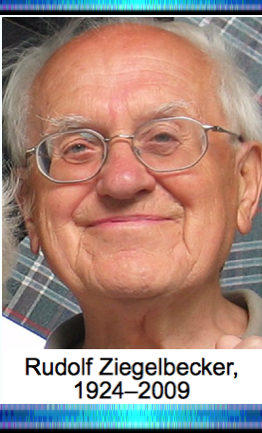 After early training and work in electrical engineering. Rudolf Ziegelbecker began a successful career in electron microscopy, where his remarkable talents as a researcher soon emerged. Additionally, because it had not been possible due to World War II, he also began to pursue university studies of electrical engineering and physics. Drawing on his knowledge and experience in research, he then directed his efforts to improve living conditions of his fellow citizens, co-founding an Institute for Environmental Research in Graz in 1970. As part of this activity, he was instrumental in ending environmentally hazardous industrial operations in his neighbourhood which also prompted his research on fluoride beginning in the late 1960s.

At the local brick works in Graz-St. Peter, Ziegelbecker discovered that fluoride emissions were not only damaging the local vegetation but were also impairing the health of his own and other children who were regularly receiving prophylactic fluoride tablets to protect against dental caries. The children were suffering from unexplained excessive fatigue, nausea, stomach-ache, and joint and limb pain, from which they recovered when they stopped taking the fluoride tablets and the polluting operations were terminated. When he pressed the local health authorities to provide data for a maximum allowable fluoride intake and evidence for an anti-caries benefit of the tablets, they were unable to do so.

He then undertook a critical examination of various aspects of the dental use of fluoride. From his systematic analyses of data and conclusions published by leading dental researchers, he was able to show Austrian authorities that neither fluoride tablets nor water fluoridation were effective in preventing tooth decay as claimed. As a result, first the local and then the entire fluoride tablet program in Austria was terminated.

Over the next four decades, Ziegelbecker campaigned tireless against water fluoridation, fluoride tablets, and salt fluoridation.

In this connection, he wrote numerous scientific and popular articles and co-authored a book with Dr Max Otto Bruker (Vorsicht Fluor, reviewed by Jörg Spitz in Fluoride 2007;40/3:205-6). He also testified at expert hearings, reported at conferences and to governmental committees, participated in panel discussions, and appeared on radio and television. His vigorous and persistent campaigning eventually played an important role in ending water fluoridation and fluoride tablet programs in Austria, Germany, and other countries in Europe.

On April 19, 2007 (as reported by Peter Meiers in Fluoride 2007;40/3:160-1), Ziegelbecker’s untiring efforts to promote a better quality of life were recognized by the Town Council with a “Citizen of Graz” award for all he had achieved for the city and its citizens. During the past year, he lost his eyesight and was stricken with cancer from which he died this year on January 12. The next issue of Fluoride will carry an In Memoriam tribute with more details of his work and life.